Great inspirational presentation by Phil Gregory (JD/MBA ’80) on his work as co-lead counsel for the Juliana v. United States case, pending in the 9th Circuit now.  Professor Ken Manaster gave really interesting introduction that sought to put the Juliana case into the context of other, more traditional environmental litigation. 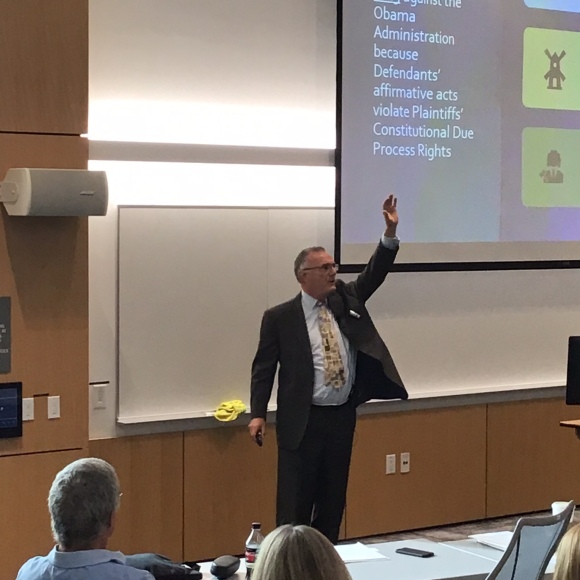 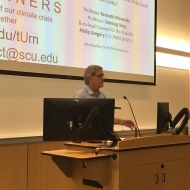 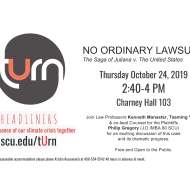 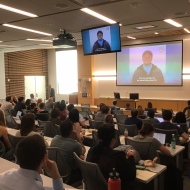 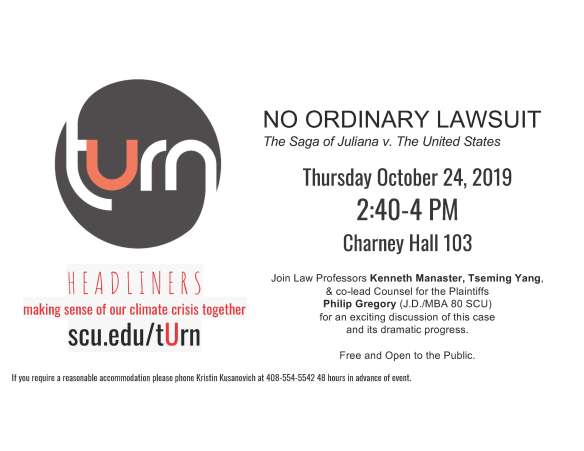 I am looking forward to be joining this climate change conference later this week, which is organized by Professor Hsing-Hao Wu, Director of the International Relations Research Center at NUK, and honored to give one of the keynote speeches. 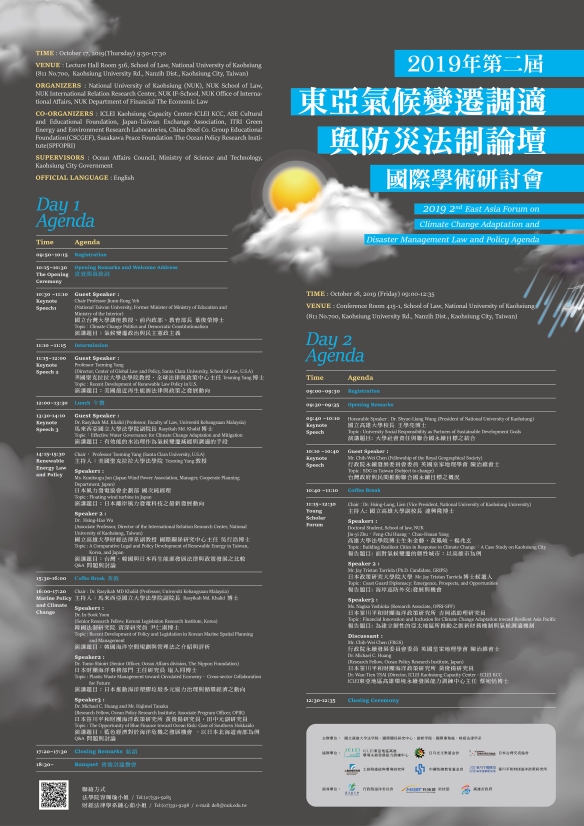 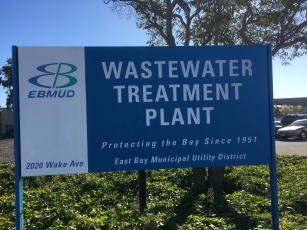 Visiting the EBMUD Wastewater Treatment Plant near Emeryville was a a fascinating experience.  (Thank you EBMUD for helping train the next generation of environmental lawyers!)  The facility services about 750,000 residents in the Berkeley Oakland area and sits right in the middle of the interchange of I-580, I-80, and the approach to the Oakland Bay Bridge Toll Plaza. The tour took us through the entire facility, including the on-site distillation plant that produces oxygen to help speed up decomposition of the sewage, the intake of the wastewater into the treatment plant, the 8 settling tanks, and the biosolid digesters that decompose the remaining sludge.

Among the interesting features of the facility – it is a net-zero energy user of PG&E power, oftentimes feeding electricity back into the grid!  That is the result of the plant’s collection of methane gas produced by the sewage sludge digesters.  The methane is fed into several diesel turbines and a gas turbine that can generate enough power to run the entire plant. So, not only does the facilitate reduce the GHG emission contribution to climate change (as measured on a carbon equivalent basis) but it actually eliminates (mostly) the need for electric power generated elsewhere (by the PG&E) to run the plant!

We also saw the intake pump house of the plant, a place where large objects are screened out to protect the pumps from damage.  What kind of large objects?:  pieces of lumber, cable, and lots of debris caught on those items. Plant workers even discovered an entire motorcycle caught in the screen once! They speculate that somebody must have opened up a manhole and dropped it into the sewer instead of bringing to the landfill.  [The screens, by the way, are essentially grates with a 5-6 inch gap spaces, so an object would have to be pretty large to get stuck.] The intake system is also where a lot of other debris ends up getting removed.  Among the top items (maybe the top item) to be removed from wastewater – “flushable” wipes.  This has been reported in various media.  “Flushable” wipes can be flushed into the sewer, but they do not decompose and simply get collected in the screening systems of wastewater treatment plants.  What’s worse is that they not only increase the amount of debris that treatment plants have to remove before the wastewater can be treated, but because of the nature of the wipes (essentially cloth rags), they catch on or collect other debris, creating larger debris, such as the legendary “fatbergs” that have been reported about in recent years. 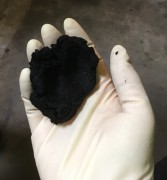 There was a particularly interesting machine that visibly helped settle the solids from the wastewater stream.  The end result of the treatment process was a black biosolid that could be handled and had the consistency of clay or dough — in wastewater engineering parlance, a “cake.”  The most disturbing  aspect of our tour were probably the common usage of food and cooking terminology, invoking images that made some of us queasy:  “wet weather primary sludge thickeners” (don’t remember this one at Thanksgiving when making turkey gravy), the biosolids cake, and even a “juicer” used for the high-COD wastes (chemical oxygen demand, wastes that have a high content of organic materials, from example wastes from slaughter houses or wineries) brought in by truck and designed to separate the waste liquid from the solid materials . . . yum.  Yet, in spite of these metaphors and the images they evoked, we still managed to have lunch afterwards.

A final bit of trivia about the plant. It provides recycled water!  I did not get a chance to ask how pure the water is, but in its current form it is  usable for irrigation, toilet flushes, and industrial cooling.  Sufficient purification can actually make recycled water suitable for human consumption and for specialized industrial processes, such as semiconductor manufacturing.  Unfortunately, significant psychological barriers remain to getting people to drink such water (“toilet to tap”).  I learned about the same issue in Singapore, when I took students to Singapore’s NEWater recycled water facility last year.  The other challenge of greater recycled water utilization is the supply infrastructure – since recycled water needs to be kept separate from traditional potable water, a separate system would need to be constructed (though that would be unnecessary if recycled water were pure enough to be mixed with other potable water). 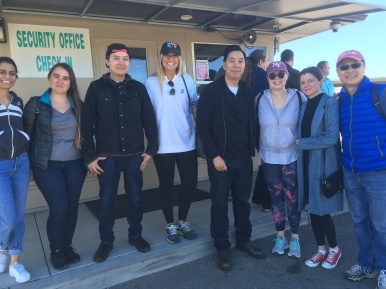 One other tidbit – if this information about wastewater treatment has (bad food pun coming) whetted your appetite for more information about sewage issues, I found episode 1 of the new Netflix documentary series “Inside Bill’s Brain” to be interesting.  It is all about his project of addressing childhood mortality linked to contaminated water, which is in turn directly linked to the challenge of managing the sanitation needs of human populations.  (Of course, the sanitation-public health connection is not new to people who work on environmental and/or human development issues in other parts of the world. But it was nice to see how somebody with lots of money was able to leverage that wealth to change the economic calculus of the marketplace and to help overcome the barriers to finding new solution for these issues.)  Kudos to Bill on that.

[edit 10-9-2019] I should have added this picture of the five of us who are leading this initiative previously. 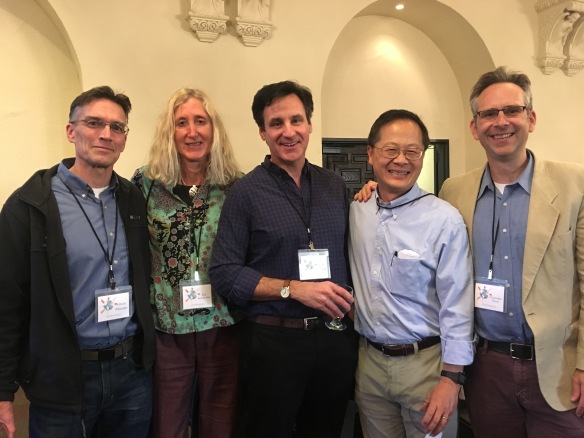 I took my students for a visit to the Monterey Bay Aquarium in Monterey.  (Thank you Monterey Bay Aquarium for supporting the education of the next generation of environmental lawyers!)  The Aquarium has amazing exhibits, remarkably well-curated, educational for visitors, and just an overall great effort in engaging the public ages 1 to 99 on marine and other environmental issues.

In past visits with students to the Aquarium, we used the occasion to read and learn about marine fisheries management issues, such as a tuna and shark conservation (which can be seen in the Aquarium’s giant tank simulating the open ocean).  This year, we decided to focus on the Southern Sea Otter, a cute and cuddly mammal of the weasel family that will make any person without a heart of stone go “oooh” and “awww.” 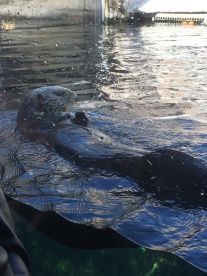 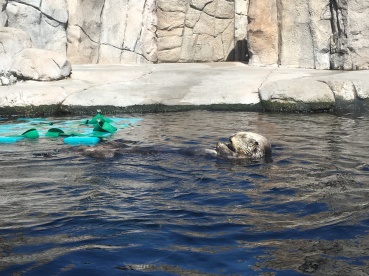 Apart from making a great exhibit and drawing people into marine mammal protection issues, sea otters are also listed as “threatened” under the Endangered Species Act and as “depleted” under the Marine Mammal Protection Act.  Several centuries, prior to the advent of Europeans on the West Coast, several hundred thousand of them could be found there.  Now, they number only in the low thousands.  Over-hunting drastically reduced their numbers, the same trend that affected the numbers of other marine mammals such as seals and whales. The problem was the prototypical Tragedy of the Commons issue – unsustainable levels of seal and whale hunting arising out of the fur trade because they were found in the environmental commons and thus not subject to protections against over-exploitation.  Because the stocks of seals and whales were rapidly depleted as a result, the major countries involved in these industries concluded the 1911 Fur Seal Treaty, which regulated the hunting of seals in the North Pacific (and included protections for sea otters) as well as the 1931 Geneva Convention on Regulation of Whaling.  (The 1931 Convention was a precursor to the 1946 International Convention on the Regulation of Whaling, which continues to govern whaling today.)  Even though hunting of whales, seals, and sea otters is generally prohibited nowadays, habitat loss and other environmental influences mean that sea otters will never again be seen in the numbers of several centuries ago.

One marine mammal species that is also protected under the MMPA is the polar bear.  Polar bears will be particularly affected by habitat loss attributable to global climate change.   Since they have evolutionarily adapted to hunting seals on the polar sea ice , the disappearance of sea ice due during the summer months will mean that they will not be able to hunt for food that way and result in their inevitable extinction as a species.  Thus goes one more sad consequence of global warming. 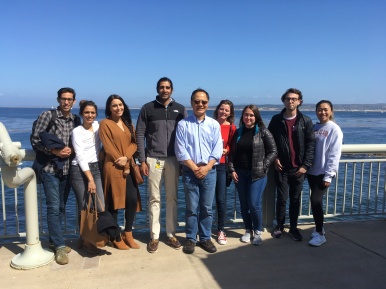 The day was beautiful though.  There is one further field trip in store for my students. On Saturday, October 5, we are off to visit the East Bay Municipal Utility District’s Wastewater Treatment Plant near Emeryville.  If the Aquarium was the quintessential “green” side of environmental law, the wastewater treatment plant will be the proverbial “brown” side .  Hopefully, the smells will not traumatize my students too much. 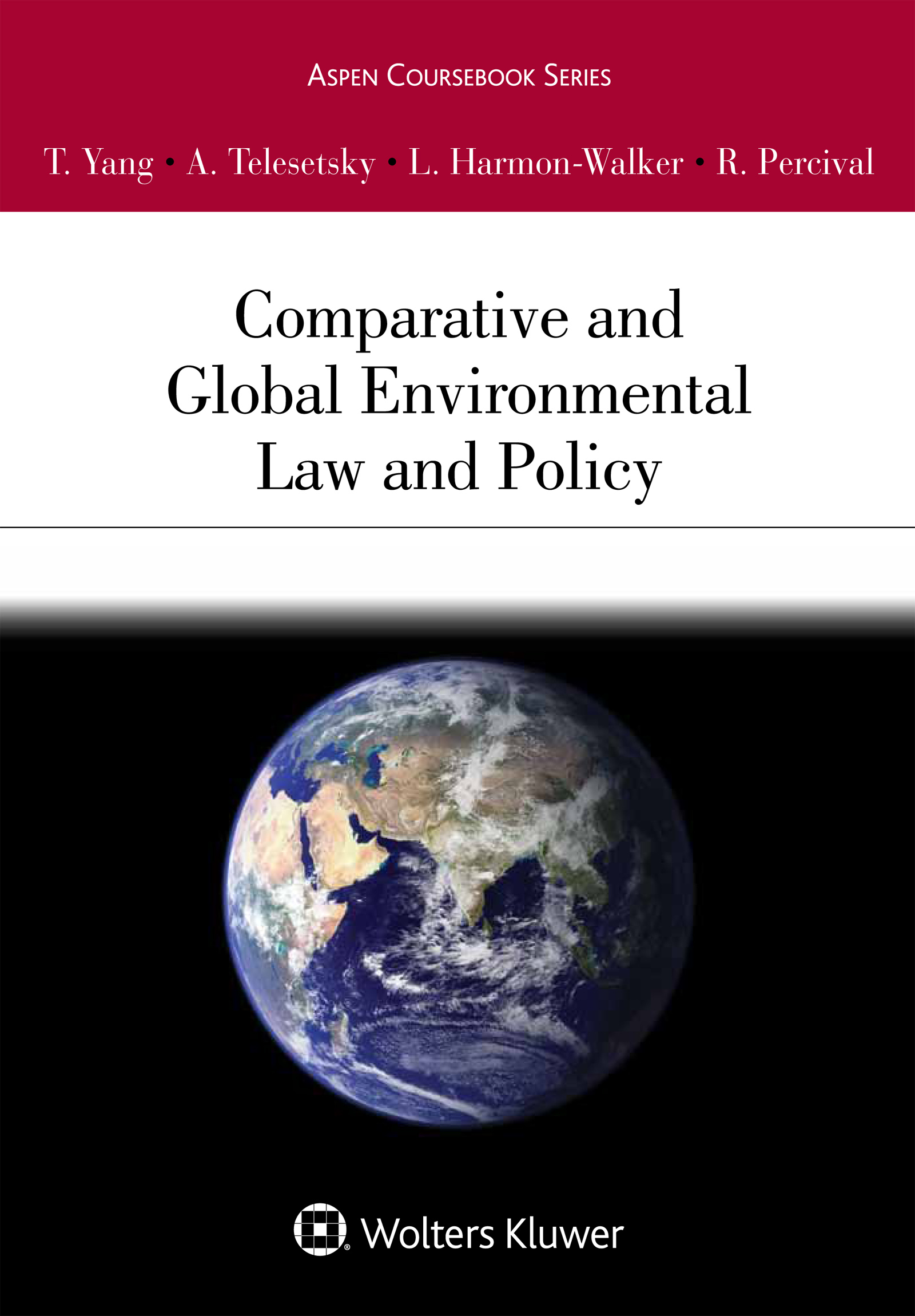