I have been taking advantage of one of the the many bike share companies here in Singapore.  The picture is of an Anywheel bike. It’s been incredibly convenient – bikes are unlocked with a smartphone app, and the app keeps track of the bike’s whereabouts via GPS. And even though public transportation is quite well designed, having a simple means of transportation for shorter distances has been very convenient, especially in this tropical heat and humidity. The government also encourages use of bikes (and electric scooter) by allowing people to ride on the sidewalks and setting aside special bike lanes on the sidewalks in some parts of the city. One of the great benefits for a tourist like me has been the ability to avoid the street and cars. Singapore follows the British in driving on the left side of the road, which has led to me having near-accidents in the past when I have been in this part of the world.
The company that I have been using, OfoBike, charges Singapore $1 per hour, but a minimum of 50 cents per use. One downside: sometimes, it’s not easy to find a bike if one is away from certain areas. On the flip-side, unlike docked bike shares, one can leave the bike close to one’s destination (but in a legal bike parking area), rather than having to finding a bike dock. Overall, for me, thumbs up for this mode of last-mile transportation.

Postscript: I spotted this on my morning run. Mmmh – probably not good bicycle parking practice. 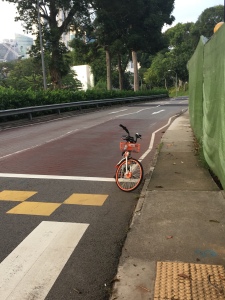