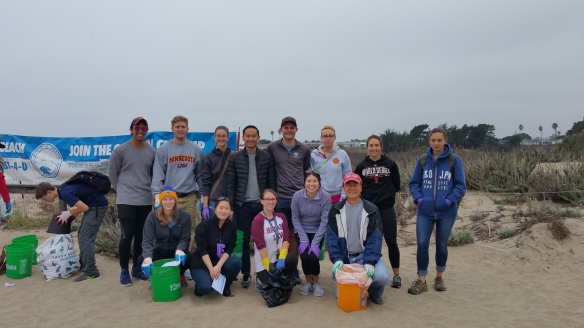 The 2017 Santa Clara Law Environmental Law Society Beach Clean-up Activity was another success!  I joined about 15 students and friends on Saturday morning at Natural 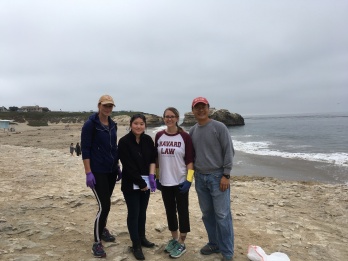 Bridges State Beach for several hours of beachcombing for trash.  We were not the only folks out there; there were groups of boy scouts, individual families, and other community groups.  (From the matching T-shirts, it looked liked the local Sony Company office had a group there as well.)  While the morning was overcast, it was a actually quite a beautiful place.  My small group (Laura, Cynthia, Ayla, and Robin) came up with about 20 pounds of trash, including many small items like cigarette butts and food wrappers to some water and beer bottles.  (The photo of somebody in the brush is of me going after some plastic plates that had been thrown deep into the bushes.  Boooooh, not cool. . . ) Quite amazing how things add up.  Another small group came up with more than 40 pounds of trash. 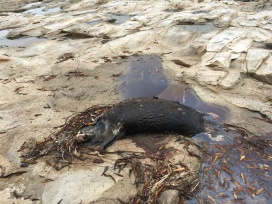 Beyond the typical trash, here were some other items of interest:  an improvised bong (yes, you read that  correctly), lots of shoes, a gasoline can, a propane torch, and an orange traffic cone (not near the road, but deep inside the bushes).  Sadly, we also came across a dead sea-otter.  A rather large animal.  All we could was to report it to the state park official onsite.

All in all, it was a great occasion of community service.  Hooray for the Santa Clara Law Environmental Law Society and all the other folks across the state that pitched in for this year’s coastal clean-up!