Here’s an excerpt from linked article:

“The story of the last election was the story of lost trust, angry voters who felt that no one in Washington, no political party, was working to deal with the problems they were facing,” he said.

He said such divisions are surmountable, but “you cannot be a good leader or a good citizen if you do not respect our Constitution and the institutions responsible for enforcing the requirements of that sacred document.”

Panetta is the son of immigrants, and he told of how his parents traveled thousands of miles to give their children a better life. “We are a nation that builds bridges, not walls,” he said. “And most of all, we need to respect the truth.”

He told a story of when he was CIA director and met the families of seven CIA employees killed by a suicide bomber in Afghanistan in 2009. He said he gave each family a plaque with a biblical verse from Isaiah: “Whom shall I send? … Here I am Lord. Send me.”

“That, ladies and gentlemen,” said Panetta, “is the sound of the trumpet that must summon all of us to action.”

It was a great call to service for our graduates as they enter the profession and an inspiring message impressing on them that their chief duty is to justice and the rule of law .  Godspeed to all of them. 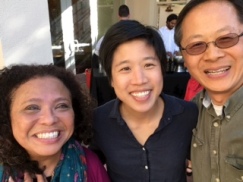