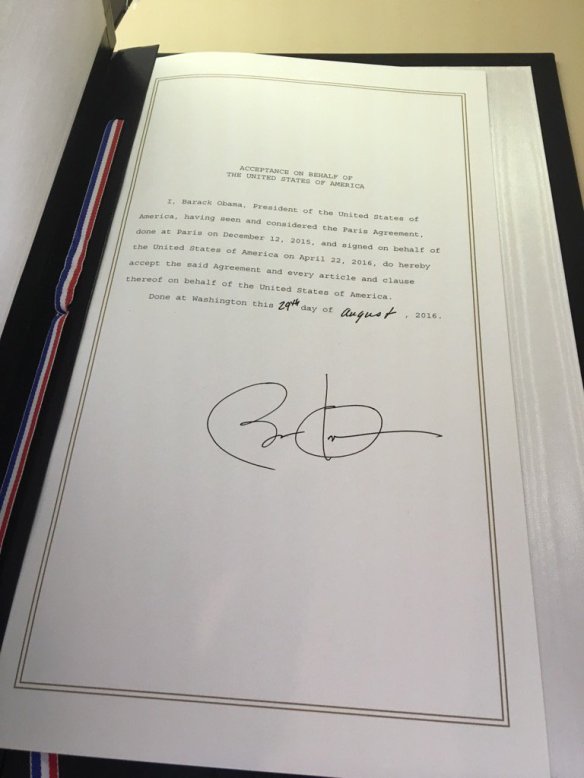 The big announcement today was the ratification of the Paris Climate Agreement by the U.S. and China.  (Strictly speaking, the US instrument is an instrument of acceptance.  Image of acceptance instrument is from White House website.)  Specifically, while at the G-20 meeting in Hangzhou, China, President Obama and China’s President Xi Jinping delivered their countries’ respective instruments of ratification to UN Secretary General Ban Ki Moon, who is the official depositary for the agreement.  (Washington Post article 9/3/2016.)  The secretariat of the Paris Agreement has already updated the ratification status of the Paris Agreement to include the US and China, showing now 26 countries as parties and representing a total of 39.06% of global GHG emissions.

Under article 21 of the Paris Agreement, this agreement enters into force (and thus becomes legally effective) “on the thirtieth day after the date on which at least 55 Parties to the Convention accounting in total for at least an estimated 55 per cent of the total global greenhouse gas emissions have deposited their instruments of ratification, acceptance, approval or accession.”   Thus, there is still a little bit to go before entry into force.  Ironically, almost all of the progress toward the 55% global GHG emission threshold for entry-into-force came from China and US joining of the treaty.  The previous 24 countries were almost all small states,  many of them tiny island nations, the largest countries being Norway and Peru.  The Washington Post article has a nice set of numbers of GHG emissions by some key countries.

As the Post article also mentions, effective implementation of the agreement is going to be heavily dependent on the outcome of the U.S. elections, since it is not likely that Trump will support U.S. membership.  On the other hand, the legal obligations attached to the Paris Agreement are fairly minimal, and there are no apparent legal consequences that non-compliance would have.

The other issue that the Post article leaves unclear is what happens if Trump does win the election, but the Paris Agreement has not entered into force by January 20, 2017, when the next President takes office.  In that case, the 3-year-mandatory membership period would not have been triggered, since the agreement would not be in force, yet.  It seems likely that under international law a country would still be able to withdraw its instrument of ratification/approval and hence avoid treaty membership once the agreement were to enter into force.  Of course, such a situation will hopefully not occur.

And so, without thinking about all the things that could still go wrong with the Paris Agreement, today is a good day for those care about the fight against climate change.