Britain’s vote to leave the European Union will undoubtedly have huge political and economic consequences for the world, apart from creating lots of uncertainty.  That is also true for the reverberations that are to come for climate change and other international environmental cooperation efforts. Some reporting/commentary that I have seen here, here, and here has already focused on these issues  There are at least three issues to keep an eye on. 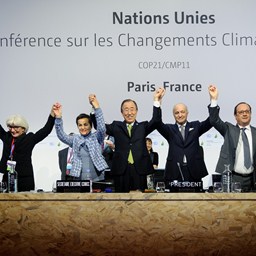 That applies to the various climate change treaties, including the recent 2015 Paris Climate Accord.  Since the GHG emission reduction commitments were provided as a group, Britain’s exit from the EU will require adjustment of both Britain’s and the EU’s emission reduction commitments in the Paris Agreement.  However, the legal implications of fixing the Brexit consequences for the Paris Agreement are likely to be messier than the practical ones for a simple  reason:  the Paris emission reduction goals were always intended to be non-binding. Hence,  failure to achieve them was never anticipated to carry any direct and formal negative consequences.

Finally, with respect to Britain’s and the EU’s commitments in other multilateral environmental agreements concluded over the past 2-3 decades, issues similar to those arising out of the Paris Climate Accord are likely to come up.  A few such treaties readily come to mind:  the Stockholm Convention on Persistent Organic Pollutants, the Rotterdam Convention on Prior Informed Consent, the Convention on Biological Diversity, nd the Minamata Mercury Convention.  Again, there will need to be some adjustments (especially internally to those treaty bodies), but probably nothing earth-shattering, at least not from an international legal perspective.

The farther-reaching consequences may well come from the underlying political trends that led to Brexit in the first place.  What do they suggest for the future of environmental cooperation, and will they undermine the wave of good will and engagement that formed the basis for the Paris Accord?  There is also one other possibility that Brexit raises.  From a perspective of pure environmental opportunism, might Britain become more available and interested in closer environmental cooperation, especially on climate issues, with the United States?

I have to confess that I share a very small professional stake that has been affected by the Brexit.  For my comparative environmental law book, I had expected to rely on a number of British cases to illustrate how the European Union’s environmental regulatory structure works.  What now . . .  Is the sky falling?  (Or more accurately, how much will I need to change things when Britain’s exit from the EU is formally and legally completed in a few years.)  Even though this question is somewhat facetious, it really does raise interesting (and troubling) prospects for the future of international environmental cooperation (and international environmental law).